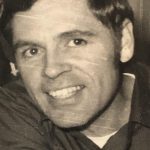 Frank E. “Nonny” Nonnemacher, 89, of Honesdale died Monday, December 9, 2019 in the presence of his family.

Born October 14, 1930, he was the son of the late Edward J. and Alice Miller Nonnemacher. He was a graduate of Honesdale High School, class of 1948.

He started work at the former Murray Company in Honesdale. Shortly thereafter color television became available in 1953. Frank opened his own business, Nonny’s TV. Nonny’s TV thrived at its original location on East Tryon Street until the early 1970s when Frank expanded the business and relocated to a larger location on Willow Avenue. Frank sold Nonny’s in 1989, retired, and moved to South Carolina, pursuing his passion of golf and a warmer climate.

Frank was active in the Honesdale business and social community before he retired. He was one of the founding members of the Honesdale Biddy Basketball program and continued coaching and working with the league long after his children had moved on. Frank was also involved with the Honesdale Little League Baseball Organization, where he sponsored and coached in the league for several years. Frank was a devoted Catholic, and active in St. John’s and St. Mary’s Parishes in Honesdale, and St. Andrew’s Parish in Myrtle Beach, South Carolina.

He was preceded in death by his sister Isabel Opinsky.

In Lieu of flowers, Frank’s family requests a donation to be made to Honesdale Biddy Basketball, 109 Ninth Street, Honesdale PA, 18431 or to Hospice of the Sacred Heart, 100 William Street, Dunmore, PA.