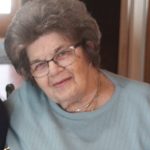 Elaine L (Rutkosky) Hillier of Honesdale died peacefully at home, surrounded by her family on April 24th.  She was 76.  She had battled extreme arthritis for many years and dementia in her last few years.

Elaine lived a full life.  While living in Georgia in the early 70’s she was an award winning potter and demonstrated on the Michigan Art Train.  She volunteered as a tutor for at risk children and became a private pilot and would fly the family to various small airports for breakfast after church on Sundays.  After moving back to her home town of Honesdale in 1975 she served on the board of the Girls Scouts until the scout office moved to Harrisburg.  She was active in the formation of the Wayne County YMCA and served as president of the Wayne County Library Board when it moved to its home at Seven Maples.  She was active with Historical Society while her husband served on that board.  She was an occupational therapist aide at Ellen Memorial Nursing Home beforing taking over mangement of her husband’s office for Honesdale Electric, Inc. until they retired and closed the business.  Most recently she served on the board of The Victims Intervention Program.

Her passion was photography and she spent many hours in the canoe at Duck Harbor with camera in hand capturing eagles, ospreys, beavers, otters and a myriad of ducks as well as every wild flower imaginable.

She is survived by her husband of 56 years Harry (Skip) Hillier, a daughter Kristen McKissick and son-in-law Vern McKissick, a sister Catherine Gregory and her husband Peter.  Her husband would like to thank those special friends that remembered her and helped us through the last difficult years.  Their love and support made it much easier.  He would also like to thank the aides from AT Home Quality Care that assisted him with her care and especially Fabienne who helped make the final months easier.  Finally we would like to thank Doctor Dewar and all his people who showed both understanding and compassion and helped to keep her comfortable in her final weeks.

Because of the world situation at this time there will be no visitation and the funeral will be limited to family members.  A celebration of her life luncheon will be held after the world returns to a more normal condition.