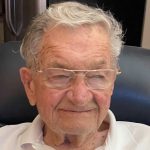 Edward Charles Erdmann, 96, of Pleasant Mount, died on Tuesday, June 1, 2021 at his home. He was preceded in death by his first wife, Doris Scholland Erdmann on August 27, 1999 and second wife Jane Mandel Erdmann on September 17, 2019.

Born on December 17, 1924 in Hackensack, NJ, he was the son of the late Charles Edward and Katherine Elizabeth (Bacik) Erdmann. Immediately following high school, Ed enlisted in the US Navy serving during World War II on the USS Guest in the Pacific. He proudly served from 1942 until his honorable discharge in 1946. He later founded Erdmann Construction in Marlboro, NJ before moving to Pleasant Mount in 1976. He continued working in construction and also enjoyed working around his farm in his free time.

He was preceded in death by his sister Katerine Kettig; his son, Scott Allen Erdmann; his grandson Mark Erdmann Jr.; step-son Charles Bartgis.