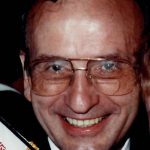 Dr. Lawrence Caruth was born on October 24, 1937 in Sterling Township of Stanley L. and Ruth L. Caruth. He ran the family farm until 20 years of age when in 1957, he entered Gettysburg College, where four years later he graduated with a degree in Chemistry. In 1955 he had joined Company H of the Pennsylvania National Guard in Honesdale as an E-1. He stayed in the Pennsylvania Army National Guard through college where after four years of ROTC he was awarded his Second Lieutenant Bars by General Lemnitzer.
Dr. Caruth graduated from The University of Pennsylvania School of Dental Medicine where he earned his Doctorate in Dental Medicine in 1965.
He entered the Army Dental Corps., training first at Forth Sam Houston, and then commissioned as a Captain, he served on Bremerhaven, Germany.
Returning to Honesdale he opened his dental office in 1969 located in Cherry Ridge, which immediately expanded. He introduced modern dentistry to the community and brought dental specialists to his office. He had 13 specialists working his office at various times.
After serving as Liaison Officer for West Point, Captain Caruth joined the 317th Medical Dental Detachment in Scranton and remained in the unit for 18 years. He rose to the rank of Colonel and served as the commander for his last four years with the 317th. He was then appointed Commander of the 1206 Dental Detachment, Dover, NJ and later he was appointed Commanding Officer of the 322nd General Hospital, one of the few dentists to ever command an Army Hospital.
Colonel Caruth retired in 1997 with various medals including one of the highest honors, the Legion of Merit.
At the ceremony where Colonel Caruth received his Legion of Merit by Major General William G. Collins, Jr. he noted “Colonel Caruth’s motto has always been ‘soldiers first’. According to his devoted staff and soldiers, Colonel Caruth represents the highest ideals, traditions, and character of the U.S. Army Reserve program. His devotion to duty, love of his country and to be the best he can be, have distinguished this outstanding man.”
Once he retired from the USAR, he proceeded to obtain his Private Pilot’s License and spent many happy hours flying to various restaurants for the “$100 hamburger.” He sold the Cherry Ridge Dental Center in 2007 to Dr. James Sirotnak and continued to work there until he retired at age 75.
Dr. Caruth was a member of the Honesdale Rotary Club where he served as President and Treasurer. He was a member of the American Dental Association, Pennsylvania Dental Association, Scranton District Dental Society (where he served as Treasurer for 7 years), The American Legion, The Reserve Officer Association and had served on the Cherry Ridge Planning Commission. At the time of his death, he was serving on the Wayne County Redevelopment Authority Board.
Dr. Caruth is survived by his loving wife, Dr. Betty deMaye-Caruth, son, Edward L. Caruth and his fiancé Lee Ann Gallagher, his daughter, Amy Korenyi-Both, her finance, Paris Hill, five grandchildren, Conor and Carley Caruth; Gabriel, Alex and Olivia Korenyi-Both, sister-in-law Barbara L. deMaye; brother-in-law John deMaye and his fiancé Catherine Leen; his brother Al Caruth, his wife Patty and various nieces and nephews. He was predeceased by his sister Louise Godek.
A Funeral Blessing will be held on Thursday, October 14th at St. Mary Magdalen Church in Honesdale at 10 am. Interment with military honors will follow in St. John’s Cemetery. Friends may visit Hessling Funeral Home, Inc., 428 Main St. Honesdale on Wednesday, 4 to 7.

Memorial contributions can be made to the Dessin Animal Shelter, 138 Miller Dr., Honesdale, PA 18431.