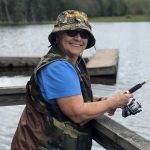 Deborah J. Menotti, 68, of Prompton, died on Thursday, February 4, 2021 at Wayne Memorial Hospital. She was preceded in death by her first husband Richard Tiel on March 24, 2005 and second husband Robert J. Menotti on February 25, 2010.

Born on September 6, 1952 in Honesdale, she was the daughter of the late Francis and Jean Wells Joseph.

After graduating high school, Deborah worked in real estate and then began bartending at Sporer’s Cafe in Honesdale. She later was the food service director at the former Serendipity Center and then the Treasurer House. Before retiring she worked at Leunes’ Bar.

She was a member of the Fraternal Order of Eagles #1858 in Honesdale.

Deb loved her grandchildren and supporting whatever activities they were involved with. She especially enjoyed attending the Special Olympics and getting to know all the kids. She loved staying busy whether it was going fishing, gardening or trips to the beach.

Surviving are her daughters Amy Potter and husband Brad of Prompton and Christina Tiel of Upper Marlboro, MD; her mother-in-law Angela Menotti of Honesdale; her brother Stephen Joseph of Honesdale; grandchildren William Reitzel and wife Rebeca, Shiann, Brianna and Zachary Potter; step-sons Adore, Nick and Dustin Menotti and their families.

She was preceded in death by her sister Kathleen Palchik.

A celebration of her life will be held at a later date. Arrangements by Hessling Funeral Home, Inc., 428 Main St. Honesdale.

Memorial contributions can be made to the Area P Special Olympics, P.O. Box 188, Carbondale, PA 18407.