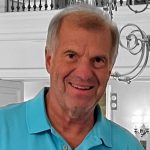 Obituary Viewed 3906 times
Share Print
David Edward Dulay, 65, of Honesdale, died on Sunday, June 26, 2022 at Wayne Memorial Hospital.  He is survived by his wife of 39 years, the former Jill Foster.  The couple married on September 18, 1982.
Born on August 13,1956 in Honesdale, he was the son of the late Anthony and Catherine (Guinther) Dulay.  He was a graduate of Honesdale High School, class of 1974.
David owned various businesses throughout his career.  He began working at the former Miracle Market where he would eventually become manager.  He and Jill owned and operated Whispering Pines Deli in Cherry Ridge.  Dave had an entrepreneurial spirit and a hands-on approach to home building.  In the early 1990’s Dave began the successful David Dulay Homes, building hundreds of homes in the Honesdale area.
In 1973 at the age of sixteen, Dave became a member of Hose Company No. 1.  During his career as a firefighter, he responded to countless emergencies and served in many offices including Assistant Fire Chief of Honesdale Fire Department.  He was a member of the Honesdale Lions Club, where he was honored in 2016, and the Wayne Pike Building Industry Association.  He was a devout Catholic and member of St. John the Evangelist Parish in Honesdale.
He enjoyed traveling and spending time with his family and friends, especially his granddaughters.
In addition to his wife, he is survived by his son Brian Dulay and wife Sandra of Dyberry; his daughter Heather Rossi and husband Leonard of Cherry Ridge; brothers, Thomas Dulay and wife Marian of Naples, FL, Gerald Dulay and wife Kay of Honesdale, and Richard Dulay and wife Kathie of Honesdale; his granddaughters, Olivia and Bianca Rossi; many nieces and nephews.
A Mass of Christian Burial will be celebrated on Friday, July 1, 2022 at St. John the Evangelist Church in Honesdale at 10 am.  Interment will follow in St. John’s Cemetery.  As per his request, there will be no public visitation.  Arrangements by Hessling Murray Funeral Home, 428 Main St. Honesdale.
Memorial contributions can be made to Honesdale Hose Co. No. 1, PO Box 174, Honesdale, PA 18431.