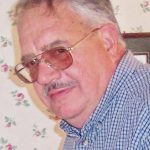 Clark W. Ordnung, 83, of Honesdale, passed away peacefully surrounded by his family on Saturday, April 30, 2022. In his final days he stated that he felt “rich beyond compare” because of God’s blessings, and he looked forward to being reunited in heaven with his best friend Margie, his wife of 51 years.

Born August 24, 1938, he was the son of the late Robert and Bertha Laszig Ordnung. He cherished his sisters and “brothers”, Judy and John Romich and Dottie and the late Roger Ridgeway.

Clark loved to have every aspect of his life organized and often told people “Ordnung” translates to “order” in German. This obituary completes his final
“to do” list.

Our Dad’s blessed life began with the unconditional love and work ethic of his parents. He gave them an A+ + + for allowing him to live a childhood comparable to Huck Finn-growing up in Seelyville, fishing, hunting, and trapping. They also secured his strong faith foundation at the Seelyville Union Chapel, where he attended Sunday School until he was a young adult. In later years he was a member of the First Presbyterian Church in Honesdale and enjoyed services at Cold Springs Chapel.

Dad said the best choice he ever made was marrying his best friend, Margie Carroll. They worked together to create a lifetime of laughter and memories with each other, their children, and their grandchildren.

He began working hard at a young age, graduated from Honesdale High School Class of 1956, and eventually managed A&P grocery stores in Eldred, Callicoon, Jeffersonville, Liberty and Monticello, New York, then in Honesdale until the store closed. At that turning point in his career, he believed that divine intervention came along, and he was given the opportunity to buy Werner’s Sunrise Market in Honesdale.

On December 1, 1982, Dad opened the doors to Clark’s Sunrise Market, one of his proudest accomplishments. He humbly noted that once Mom came on board and started cooking in the market’s kitchen, his dream was fulfilled. He appreciated his dedicated, hard working employees, loyal customers and vendors and recently summed it all up with “God was good to us!”

Besides his family and friends, Dad’s many loves included:
Sharing stories, telling jokes, long road trips, camping in almost every state in the continental US in his GMC Truck and camper, Corvettes, John Deere Tractors, creating and stocking “Golden Pond”, Ten Mile Hollow Sportsmens Club, poker games around Wayne County or in his garage on Wednesday nights with his buddies, video poker on his iPad or traveling to any casino with anyone who would go with him, Canada fishing trips, fish fry’s, eating bizarre foods and trying to get others to share them, Dave’s Manhattan’s, Dirty Water, Bluegrass, Old Country and Rock Music, pranking telemarketers and making new memories and friends as each chapter of his life unfolded.

We know his fun, kind, witty, and generous persona will never be forgotten!

We wish to thank his Caregivers of America friends, especially Cecelia and Ashley, and his friend Mike for doing the jobs he wanted to do but couldn’t.

Funeral services will be held on Thursday, May 5, 2022 at Hessling Murray Funeral Home, 428 Main St. Honesdale at 11am by Pastor Mary Bryant. Interment will follow in Bethany Cemetery. Friends may visit on Wednesday, 4 to 8 at the funeral home.

Memorial contributions can be made to the Cold Springs Chapel, 1530 West St. Honesdale, PA 18431.