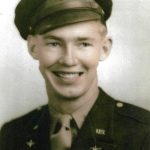 Born in Lake Ariel June 18,1925, he was the son of the late Spencer and Jennie Marshall Bell.  A graduate of Lake Consolidated High School, Carl enlisted in the Army Air Corps when he was 17 years old.  After completing training, he was commissioned a 2nd Lieutenant and received his silver wings.

After the war, Carl enrolled in East Stroudsburg State Teachers College (now East Stroudsburg University) graduating in 1950.  He taught school in Damascus and coached boys and girls basketball and volleyball as well as boys baseball.

Active in the community, Carl was one of the charter members of the Damascus Township Volunteer Ambulance Corps and was a First Aid and CPR Instructor as well as an EMT.

He was the co-founder of the Damascus Teeners Baseball Team and served as its first coach.

A strong supporter of the American Red Cross, he was a 12-gallon blood donor and he and Helen were both pheresis donors.

Carl was a member of the Damascus Manor United Methodist Church and served for many years as a trustee.

After retirement, he and Helen enjoyed traveling.  He also was a lover of the outdoors and loved hunting and fishing (especially in Canada) and tending his garden.

Carl was a devoted family man who loved his wife and family dearly always supporting his children and grandchildren in their various activities.

In addition to his wife, Helen, he was preceded by a brother, Raymond, and a sister, Marjorie Chapman, both of Lake Ariel, PA.

Carl was a loving and humble man of faith, integrity, kindness, and generosity. He leaves us with a legacy and influence that will live beyond his physical life, not only for his family but also for the students, the community, and the country he served. He will be greatly missed.

Following the service, a luncheon will be served.

In lieu of flowers, memorials may be sent to: