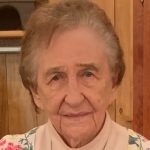 Born on February 9, 1934 in Forest City, she was the daughter of the late Frank and Alice Mikulewicz. After graduating from Forest City High School, Alice began working at Bell Telephone in Honesdale. After raising her children, Alice went back to work at Waymart Knit Wear and later retired from Northeast Press.

Alice was a faithful member of St. John the Evangelist Parish in Honesdale. She attended Mass daily and enjoyed breakfast with her friends following. She also enjoyed bus trips to the casinos with friends and family.

She was preceded in death by her sister, Frances Kliwinski.

A private Mass of Christian Burial will be celebrated at the convenience of her family. A graveside service will be held in the spring. Arrangements by Hessling Funeral Home, Inc., 428 Main St. Honesdale.